Below is an update sent out to Avalon’s supporters following the opening two rounds of the 2017 New Zealand Superbike Championship, where she is racing the MTF Vehicle Finance ZX6R in the Supersport 600 class.

Phew, what a start to the year!

The first weekend in January 2017 saw the opening round of the New Zealand Superbike championship at Ruapuna, Christchurch. We arrived in town Wednesday night ready for a busy weekend, kicking off with an extra practise day on Thursday as well as the usual full day riding on Friday.

To be honest, the weekend got off to a terrible start as over these two days we encountered many handling issues with the bike. These including a non-operating rear shock absorber and rusty steering head bearings which are fairly major issues!
Nevertheless, we managed to resolve most of the issues step by step as the weekend went on, and eventually made some progress in the right direction. By the time qualifying came around on Saturday we were more-or-less on top of things and I went out to secure 10th position on the grid. I wasn’t overly happy with this, but it certainly could be worse due to the particularly strong 24 rider line-up in my class (600cc Supersport).

In race 1 Saturday afternoon I got off to a flyer of a start, holding 4th position on the opening laps and then battling with a few riders for the race duration, finishing up in 7th place. We were pretty stoked with this result as it was a great salvage after how dreary things were looking the day prior!
Races 2 & 3 were held on Sunday over 15 & 20 laps respectively. With Ruapuna being a very physical circuit I knew it would be difficult to maintain pace for the whole race and tried to stay as focused yet relaxed as possible throughout the day. Race 1 was another cracker finishing in 7th position, and in the 20 lap Grand Prix in the afternoon I managed 8th.

Overall it was a really enjoyable weekend racing at Mike Pero Motorsport Park and I knew we were heading to the next round in Invercargill with a much better bike and better prepared rider. 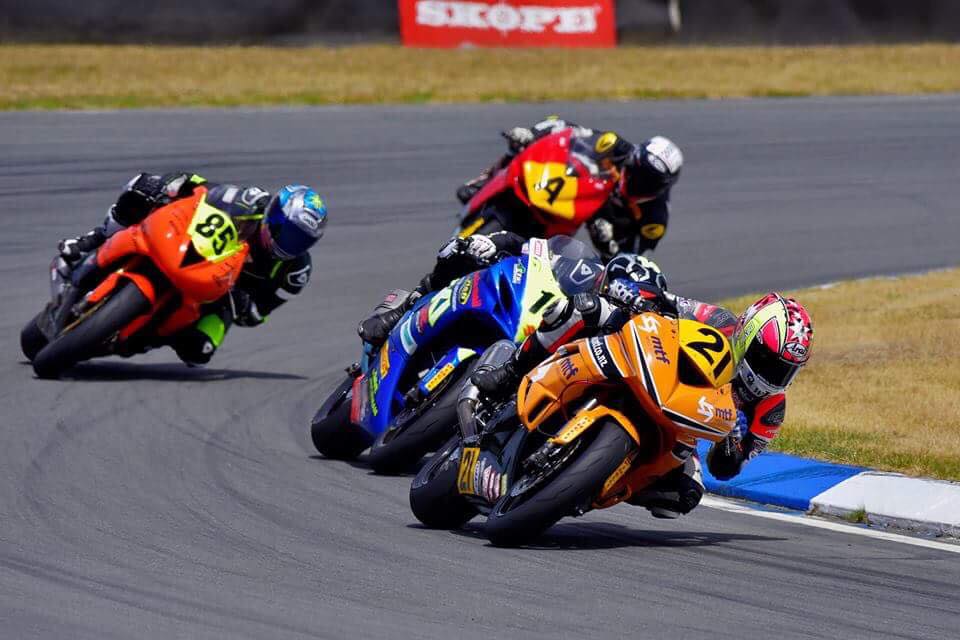 Invercargill, well is Invercargill, and despite being my favourite circuits layout in the country, the summer weather gods certainly weren’t on our side this weekend. Extremely gusty winds and rain all week made it difficult to keep the MTF pit shade down, let alone actually ride in these conditions.

Teretonga’s fast, flowing nature is particularly hard on tires meaning a good bike/suspension set-up is critical to a good race result. Practise went much better than the previous weekend and all was looking great for a top 5 finish until Saturday morning when… clacker clacker crunch crunch went my engine!! Not the noise any racer (or mechanic) wants to hear.
Fortunately one of my fellow competitors had a spare engine he was able to lend, and my mechanic Ozzy and Kawasaki expert Seth Deveroux managed to do a full engine swap in 1.5 hours! As we got the 5 minute call up for qualifying I saw that they bike was going to be ready and suited up for the session, determined not to let this set-back hinder our progress. The engine was a lot slower than my original one but I still went out and set my fastest lap of the weekend immediately, before being black-flagged because one of the flag marshals claimed to see fluid coming out of my bike. I pitted and by the time they looked over it and saw nothing was wrong, my tires had cooled down and it was pointless to head back out (we have to use the same tires for qualifying and Race 1). I was happy with my lap time anyway and ended up 6th on the grid, closing out the 2nd row.

Race one held later in the afternoon was interesting with spots of rain for the first few laps. I was extremely proud of what we achieved finishing in 4th position – my best result on the 600 yet! A great result when just a few hours earlier our weekend could have been all over. 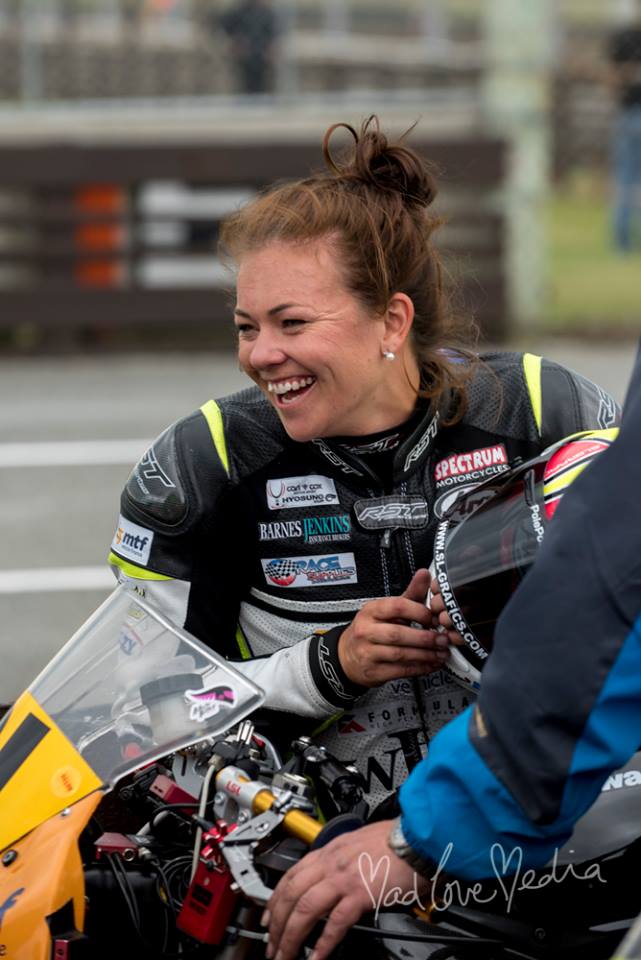 Sunday bought glorious sunshine in the morning, abruptly followed by a heavy downpour right before the racing started. This meant our first race was held in wet conditions (which I don’t particularly enjoy to be honest) and I finished in 9th place. We were happy just to finish however as my last few outings in wet weather conditions haven’t ended with me actually on the bike.  By the afternoon, heavy winds had dried the circuit out and I went on to have my best race of the year in race three for the weekend. Being inside the top 3 on the opening lap was a huge confidence boost and I managed to maintain the fast pace for the whole 20 laps, battling, funnily enough, with my boyfriend Jake. I rode around the outside of him at turn 1 which would definitely get the vote for ‘fan favourite pass of the year’! haha. We had a good duel for two laps but he was much stronger on the brakes and passed me back once and for all with a few laps to go. I finished up with another 4th place and took home bragging rights as I set the third fastest lap of the race, just 0.3 off the new lap record set in the same race.

I traveled home from the South Island on such a high – even with the broken engine in the back of the van. It was a successful and productive couple of weekend’s racing, consistently moving forwards and getting so close to a podium in one of the premier classes of racing.

To finish a race (or two) inside the top three is now a very realistic goal for the upcoming North Island rounds of the championship. The engine is being repaired and will be back on track for round 3 of the championship to be staged at Taupo Motorsport Park on the 25th and 26th Feb. 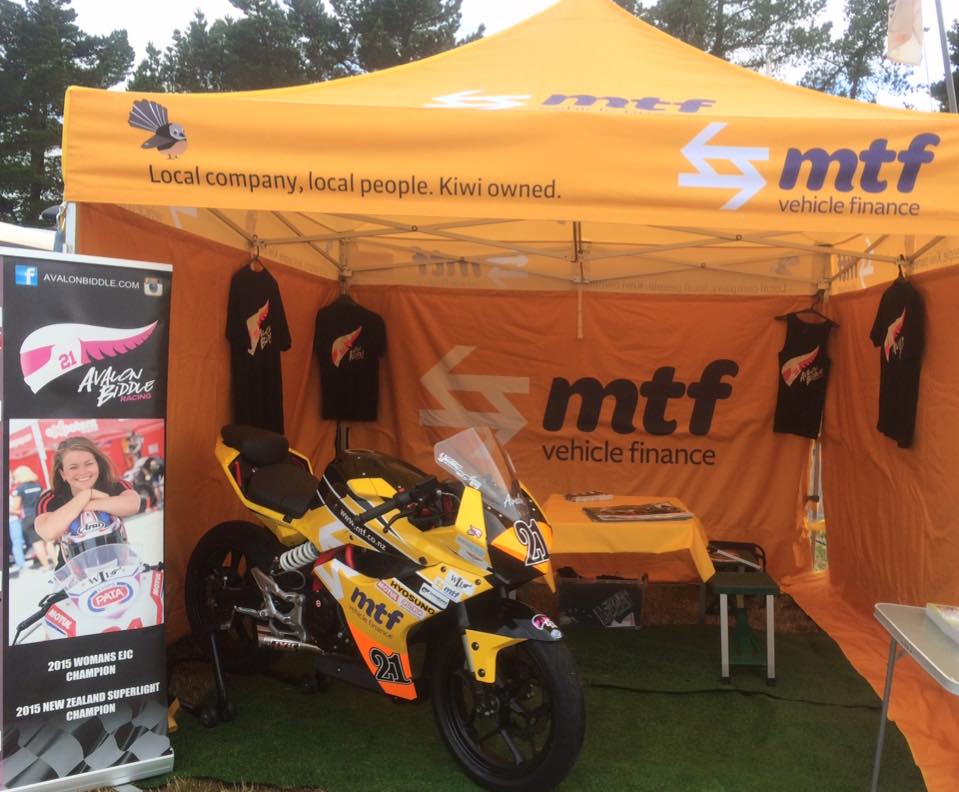 Between now and then is of course the MTF sponsored Wellington Seven’s where I’m looking forward to being part of the MTF Vehicle Finance display. Hope to see some of you there!