Mike Pero Motorsport Park in Christchurch hosted round 1 of the New Zealand Superbike Championships this past weekend in the scorching Canterbury heat. It was a fantastic weekend for me racing in the superlite class on Greg Percival’s No Hair Racing R 450. Unfortunately Greg’s rider Glen Orwin fell ill not long ago and was unable to race the national championship season. I’d like to say get well soon to my good friend Glen and thank him for letting me take up his spot on the bike, which means I can get some beneficial racing in before heading overseas shortly for the 2015 Pata Honda European Junior Cup and European Womens Cup.

This opening round of NZSBK was a double header, meaning practise started on Thursday and we had 5 races over Friday, Saturday and Saturday. Thursday was my first ever ride on the bike and after overcoming a small electrical issue I was able to spin some laps and get accustomed to the bike. I was very impressed with the smooth power delivery and top speed of the machine – Greg has built a truly incredible engine.

Friday qualifying went ok and I ended up 3rd on the grid. In first race on Friday afternoon I was battling for the lead with a local hotshot the entire race, passing him on the last lap and going on to take the win. I set my fastest lap on the last lap of the race and it was within half a second of the lap record so the whole team were very happy with our combined bike and rider efforts.

We took another win on Saturday morning which was awesome. In the race on Saturday afternoon I was trying hard to catch up to the leader after an average start when I got on the gas a little to hard and spun the rear right around, ending up on the tarmac. I was able to pick the bike up (thanks to Formula Fit gym for the training which meant I could pull off the 160kg dead lift mid race!) and rejoined, moving up from last place to finish in 8th and pick up some valuable points.

The final two races were held on Sunday, again in good temperatures and I took another win in the morning race. We made the bike a little softer after the crash on Saturday which felt a lot better and I was feeling confident for the afternoon race – the New Zealand Grand Prix. Firing into turn one on the first of 12 laps I lost brake pressure and struggling with fading brakes for the rest of the race, going on to finish 3rd. 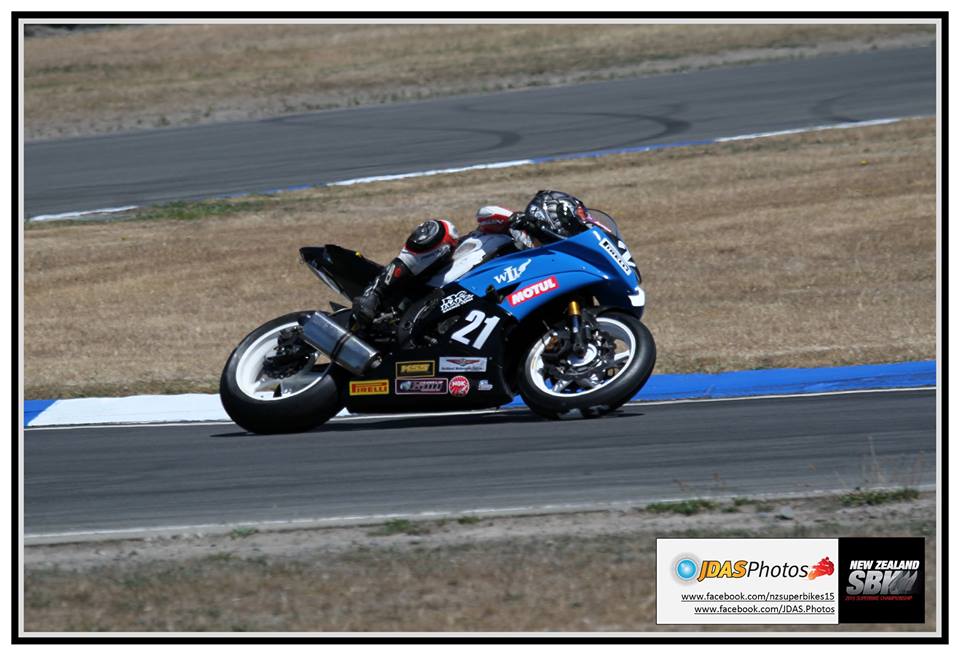 Overall I am really happy with the weekend. I love trying to find the limit on these 450’s and being amongst the smiling faces in the pits of NZ road racing. My riding, racing and lap times are always improving so we can be sure that we are on the right path.

I’d like to say thanks to Greg and Jane for this opportunity and to Phil and Ben for all their help this weekend. Also thanks Connor for doing my pit board, Jake for the help in the pits and Rex for supplying me with some rear tires – hope your knee gets better asap.  Finally thank you to my amazing sponsors who make all this happen, and give a kiwi girl the chance to show her talent the world – WIL sport, Rex Mincher and Charles Investment Group, NGK, Race Supplies, Ozzy Performance, Auckland Motorcycle Club, Formula Fit, Sidi, Backflips Clothing, Bike Rider Magazine, Deepweb web design.

Now we move on to Levels Raceway in Timaru where the second round of the championship will be held this coming weekend. I’m already excited to get back on the bike!

Until then, all the best
Avalon

And follow the action next weekend with live timing and video by CTAS http://www.ctaslive.co.nz/wsNZSBK.aspx , or on facebook www.facebook.com/nzsuperbikes15