Having arrived back at the WIL Sport base in Alicante, Spain after a busy past month on the road I thought it would be a good time to send out a mid-season update.

The first half of this year with the Rumi Moto3 has been difficult, involving a few issues in the development of the engine and the bike. We are competing in the Italian Championship (CIV) but during the first six races of the season I missed out on making the start of a couple races due to blowing up engines in practice, although we had made significant gains on performance and overall speed. Unfortunately in the two of the races that I did start the engine did not quite make it to the end of the race. I can honestly say its been pretty disappointing to make so many sacrifices and travel all this way to not even get a chance to race to the level of my ability and show Europe my full potential! That said however, it is a developmental project and I am proud that we have made some big progress lately and have been able to learn so much – especially about the mechanical side and the electronics of these beautifully hand built Moto3 racing machines – which is something that is crucial these days and hard to get a grasp of without the personal experience. Things with the bike are really getting underway now and the Rumi Moto3 is getting level where we can be competitive against Europe’s best.

The second half of the season is underway now with most recent event held one week ago – Rounds 7 & 8 of the CIV Italian Championships held at Misano World Circuit. We had been in Misano for the week prior to the race to prepare and managed to get along to see World Ducati Week which was such an awesome atmosphere and a great reminder of the passion the Italians have for motorcycles and motorcycle racing.

Come race weekend I was more than ready and fortunately we had extra practise on Thursday too. We used this and the Friday official practise day to attempt to work through a lot of gearbox and clutch issues with the machine. The final qualifying was held Saturday morning and went well and despite riding around continuing issues – I qualified 30th out of a full grid of 40 riders.

Race 1 for the weekend on Saturday afternoon got off to a strange beginning as the start was delayed twice and by the time the actual race got underway it was raining steadily and all riders had fitted wet weather tires. I rode a steady consistent race to come home in 14th position, taking two precious points. Everyone was over the moon we had finally scored points this year; it was a great feeling to get a good result after all the hardships!! 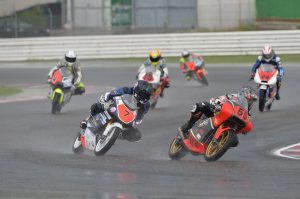 Race 2 was held on Sunday in dry conditions. Unfortunately my engine got slower and slower during the race and expired after 10 laps.

It has also been excellent to get some other extra riding in while over here, mostly with fellow WIL Sport riders Connor London and Jake Lewis. I completed two days of riding before the world superbike round on Portimao circuit in Portugal on Jakes European Championship winning cbr500. It was an awesome experience to ride at this exhilarating circuit! Even on the small 500cc machine the up and down hills were enough to make my stomach drop so you can only imagine what they must be like for the superbike riders trying to keep the front wheel down.

Connor and I were very privileged to get more track time at this track on the following Monday, doing a ride day with Crescent Suzuki world superbike rider Eugene Laverty. We were aboard standard road bikes with road tires and wing mirrors so giving him a race was not on the cards for the day (ha ha) but we could learn an incredible amount from riding behind him and some one on one coaching.

We are now planning on getting some more on bike training in over the next two months together, then I will be heading back to Italy to test the Rumi before the last round of the Italian Championships on October 16,17,18th. The team will be working really hard for a great result to end the season on so I really cant wait to see what we can do at the amazing Mugello circuit.

I am looking for any riding/ racing opportunities here in Europe before then, and for summer in New Zealand, so if anyone knows of anything out there please let me know.

Massive thanks to all you sponsors and supporters for the wonderful support, without this team of people these amazing experiences and path towards world championship racing wouldn’t be possible. Your support is really appreciated!