This past weekend was the 2010 Australasian Formula Extreme Championships, held at Winton raceway in Victoria, Australia, a meeting I had been looking forward to all year.

My mum and I picked up my bike from the BikeCorp warehouse on Thursday in time for practice on Friday. The day went reasonably well, although the surface at winton was really different to anything I had ever experienced and hard to get used to. I had a small front end crash in the middle of the day which knocked my confidence a little as it happened without any warning what-so-ever.. Big thanks to everyone who helped get my bike back together and cleaned after the accident.  We spent the afternoon making some suspension changes in order to get better grip out of my bridgestone tires.

Throughout qualifying on Saturday the track started a little so I scrubbed in some wets and then went out on slicks and posted 4th fastest time – just squeezing on the front row.

I was pretty excited by the time race 1 rolled around, I got off like a gun and lead the first lap which probably surprised everyone a bit! Al Phillis and Peter Galvin got past on the 2nd lap, leaving me in 3rd place where I finished – a great result as I also managed to drop my lap times a fair bit.

Race 2 saw me lower my lap times a little more and finish in 2nd position as Peter Galvin wasn’t able to start the race. I was struggling a lot with rear grip by the end.

Uncharacteristically, I got an absolutely terrible start in race 3 and struggled with tire grip especially from the front, right from the beginning of the race. I slid around for the rest of the race and finished in 4th. When I had a look at the tires it was obvious where the traction problems were coming from as they were torn badly right on the part of the tire needed for drive. We swapped tires and put some more pressure in for the 4th and final race and I was able to do some better lap times again and finish 2nd.

These results left me the winner of the 125gp sport class, and would have also placed me 2nd outright in the production class. It was a good feeling to come away with the satisfaction of some good results and knowing I rode the bike well but also unveiling specifically a few areas I can really work on to improve my racing. 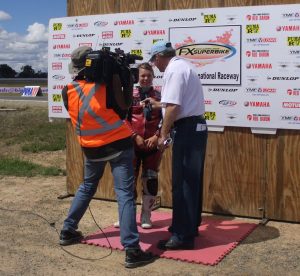 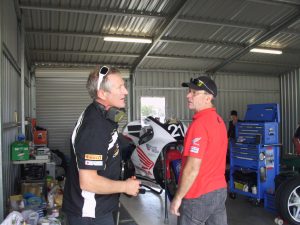 It was also great to be pitted with Robbie Philis, who was a real laugh, and told me he won his first world superbike race at  one of my favourite tracks, Manfield, along with his son Al and a few others who made the weekend really enjoyable.

I want to say a huge thank you Uncle Geoff/BikeCorp for looking after us all weekend and somewhere to store the bike etc, and also Mal Metcher for his work on the spanners and teaching myself and dad some new things.

And finally thanks Mum and Dad for an awesome weekend and all your time and effort!