My dad and I just returned from Melbourne, where I raced my Honda rs125 at the support races for the Bel Ray 6 hour at Phillip Island. The weather was superb and we had a great weekend!

After some hiccups with customs and freighting of my bike to Australia (where it even got sent to the wrong state) we eventually picked it up on Thursday and prepared it for the weekend ahead. My bike is set up for the Australasian formula extreme championships in Victoria in 2 weeks time where I am racing the ‘stock’ class, so it was in completely standard form, which we knew was going to be a challenge at the fast, flowing Phillip Island circuit.

Friday morning was practice and qualifying which I used to find reference points and tune the engine to get the most out of my bike. I qualified 10th in the grand prix class, which consisted of 250gp, 125gp and 250 mono bikes. We also had a race Friday afternoon where I finished 6th; 4th 125.

The first race on Saturday was my favourite of the weekend. I didn’t get a very good start but was able to get into a good rhythm and keep the momentum going through the fast corners to make my way up to 2nd! I was so excited after that race and had dropped 5 seconds off my fastest lap time from the previous day. Dad said I looked like a different person on the bike and it certainly felt like it.

Race 3 saw me with a blistering start, and locked it some good battles with other 125’s and 250 monos. It has been a while since I’ve had close racing with similar bikes so I really enjoyed these battles.. Until I out-braked myself while passing someone going into the Honda hairpin and overshot the corner! I lost a few places after that and wasn’t able to make the time back up, finishing in 5th position and 3rd 125. By now my bike was sliding around a lot in the heat and I was struggling to get accustomed to the feeling of the rear stepping out so much through some 5th gear corners.

By the 4th and final race of the weekend the wind had picked up and I got a terrible start. However, I concentrated hard on riding my own lines and a style that suited my bike and managed to pass most the bikes back but unfortunately it was a bit too late as I didn’t quite catch the two 250 monos that I wanted to beat. I still managed to finish first 125 as one of the fast guys crashed ahead of me. 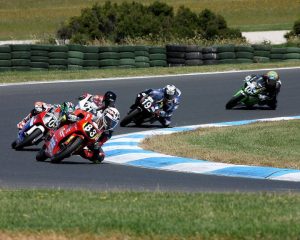 Overall, I feel I certainly tweaked my riding techniques and managed to score the most points for the weekend out of the 125gp’s. This leaves me in good stead for the upcoming races, including the tri-series at Hampton Downs this weekend, Formula extreme in Australia the following weekend and of course, the New Zealand Championships starting late January.

Finally, thanks to my sponsors notably Geoff and Gay Ward who made this trip possible and thoroughly enjoyable.